Orthodoxy in America
/ Our Parish / Our Clergy 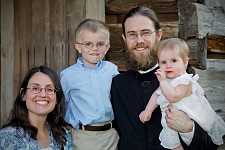 Father Daniel Bethancourt is our pastor/priest.*  Fr. Daniel received a B.A. in Liberal Arts from St. John's College (Santa Fe Campus). After spending two more years in Santa Fe doing administrative and security work at a homeless shelter and treatment center, participating in the construction of Holy Trinity Orthodox Church, and serving as pastoral assistant at Holy Trinity, he attended St. Vladimir's Orthodox Theological Seminary in Crestwood, NY, receiving a Masters of Divinity.  After graduating from St. Vladimir's, he spent a year working as the Director of Recruitment for the seminary, while his wife, Presvytera Maria**, completed the M.A. program at the seminary.  Fr. Daniel was ordained to the holy priesthood in June of 2008. The Bethancourts moved shortly thereafter to Shreveport, with Fr. Daniel beginning as pastor at St. Nicholas in July of that year.  They have two children: Peter Basil and Joanna.

* "Priest" is the English rendering of the Greek word, "Presbyter," found in the New Testament.  This title has been used for the pastors of local congregations since the early days of the Church.

** "Presvytera" or "Presbytera" is the feminine counterpart to the word, "presbyter," and is the title given to the wife of the priest in the Orthodox Church (this is the Greek practice; the Arabic "Khouriye" is often used in Antiochian practic, "Matushka" used in Russian practice, etc.).

St. Nicholas is a parish of the Diocese of Wichita and Mid-America.  The bishop of our diocese is His Grace, Bishop BASIL.  Our diocese is part of the Antiochian Orthodox Christian Archdiocese of North America, of which the Primate is His Eminence, Metropolitan JOSEPH, who is in turn a member of the Holy Synod of Antioch, headed by His Beatitude, Patriarch JOHN X.